At our craft sale on Saturday I noticed a woman eating what seemed to be a massive slice of nanaimo bar. She caught the eye of several other customers around her, who were also ogling the dessert and asking where she got it.  It wasn't something we were selling here, and she said her friend had made it - and that it was raw!  This made me obsess about how to create my own version of a raw nanaimo bar, so last night I finally had the time to experiment.  I had been looking for more vegan, gluten-free and sugar-free treats to make for friends over the holidays. Wow!  This raw nanaimo bar is incredible!  In general I like the idea of nanaimo bars, but usually find them far too sweet and lose interest in them part way through eating one.  Usually pure confectioners sugar (powdered icing sugar) is what makes up a large portion of the mid-layer.  I have tried vegan versions successfully in the past, which are delicious but still very sweet.  I wanted a three-layered sweet that resembled nanaimo bars, with nuttiness, coconut, rich creamy filling and smoothe chocolate topping.  This raw recipe is by far the best nanaimo bar I've ever had. It's a variation on several recipes I gleaned from these sources - Gone Raw and Raw BC - as I did not have all the ingredients they called for.  Here's my version of the recipe - I'll see if I can remember exactly how I made it as there was some guessing and estimating going on.  Enjoy in small portions, and share with friends!

Combine each layer separately in food processor.  Then press into an 9x9 inch pan and chill.  When firmly set, cut into small squares.  Can be stored for several days in refrigerator or frozen for longer storage. 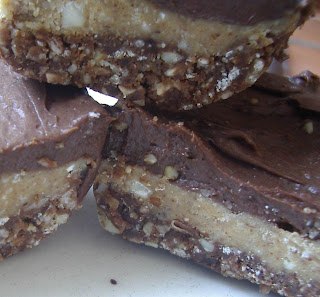 Posted by littlecityfarm at 1:21 PM