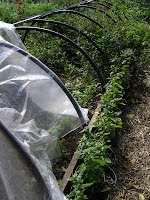 October 21 - also planted our crop of assorted winter greens in the double raised bed that acts as our coldframe. We have thin black PVC piping curving over the bed to create a frame - the plastic pipe is set on metal stakes which are dug into the ground for sturdiness; then we cover this frame with plastic sheeting to create a grow tunnel that acts as a small greenhouse on the sunny winter days.

This year I planted cilantro, basil, red winter lettuce, buttercrunch lettuce, mizuna, mesclun, tatsoi, spinach, arugula, swiss chard, dill and green onions. The herbs will grow slowly, but the greens are already coming up nicely. We also keep kale in various beds in the winter, carrots are still in the ground (nice and sweeet now after our frosts), and the greenhouse is packed with hot peppers, eggplants, and basil in pots, plus chard, arugula and other greens in the beds. We don't need many leafy greens in the winter, as we are fine with eating seasonally (going more toward root veg in the winter, or greens we have preserved in our freezer), as well as sprouted indoor greens. However, it is heartening to peek into the tunnel or lounge in the greenhouse on cold days, enjoying the fresh green colours and flavours, and dreaming of spring again.
Posted by littlecityfarm at 6:14 AM No comments:

Oct 21 Garlic Planting - it's a little later than most years, but this October has seen incredibly warm weather (upto 30C), sunny days with mild nights. We just kept harvesting from our summer beds: lettuce, tomatoes, eggplants, peppers, chard, basil, and didn't feel ready to pull plants out and prepare the beds for winter.

Finally near the end of October I decided I had to plant the fall garlic, or it would have to wait until spring. I pulled the entire basil bed, made a few last batches of pesto, and then I put in one full bed (5x8 raised bed) with about 150 garlic, which will make only a reasonable dent in the amount of garlic we eat in this household. Next year I will consider claiming two raised beds for our garlic planting! 9 rows of organic elephant garlic (don't know the variety - saved from our CSA farmer, Martha); 1 row each of heirloom organic garlic from a friend on Salt Spring Island in BC - White Polish, Salt Spring, Red Russian, and Chinese Rocambole.

We recently heard a friend talk about his father's cafe, which uses nearly 10,000 garlic bulbs in a year to supply the cafe kitchen (garlic is a staple to start nearly every dish!). All this garlic is planted each year, diligently on the father's nearby farm. I love the connection from farm to table, with the work done by the same hands - and the idea of measuring your cafe status by the amount of garlic used!
Posted by littlecityfarm at 6:04 AM No comments:

We have started advertizing for the upcoming craft sale that will be held here on Sat, Dec 8. The "A little bird told me craft sale" will feature 8-9 artisans/crafters who will be showcasing their work throughout our house.

The house will be transformed into a hub of musical instruments, knitted goods, baked treats, handbound books, herbal soaps, photogrpahy, recycled clothing, and much more! All items are handmade, with the emphasis on using recycled or earth-friendly materials! A great place to do your holiday shopping while supporting local crafters...

We hope this will become a semi-annual event, and grow to incorporate other houses in our neighbourhood, developing into a walking studio tour the way several other neighbourhoods in our city have done.
Posted by littlecityfarm at 5:47 AM No comments: 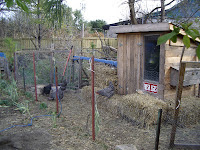 We've had our first few hard frosts, then a little snowfall, and temperatures dipping to -4C at night. It's time to prepare our chickens for the winter months ahead.

At this point we are planning to keep the girls in their coop for the majority of the winter, unless the temperatures drop drastically in which case they can roost in our greenhouse (where we have a small heater available). We have surrounded the coop with strawbales for added insulation, and installed a small heat lamp which is on a timer so it goes on mid-night.

So far the girls are adjusting well to the cooler temperatures, getting a chance to warm up by stretching their legs roaming through the garden/yard during the day. We have started feeding them warm oatmeal in the mornings, which they devour (if you add rice milk they go crazy for it! - although this is a rare treat). They lay a few less eggs, now 4-5 per day instead of 6, and this is due to reduced light levels (it's dark by 5 pm now, at which point they climb on their perches and tuck away for the night). They have also developed a new yard nest, laying eggs in a small nest fashioned under a huge pile of twigs & brush near their coop. It's a perfect wild nest, completely hidden and tangled under bramble and raspberry canes - safe from predators, and cozy.
Posted by littlecityfarm at 5:39 AM No comments:

In appreciation of the apple! Apple tasting extravaganza 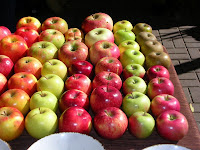 Again, it's been a busy few weeks so not much time to post updates here. A few weeks back we hosted a "heritage apple tasting" which was an amazing afternoon of great people, unique flavours (from tart, to sweet, to crisp, to sour, to dry), interesting learning, and later delicious homemade wine (thanks Alfred & Meghan!)

A huge thank you again to Bob Wildfong, of Seeds of Diversity, for leading us through the history and flavours of 22 different varities of apples! All varieties had been purchased at the local farmers market, from an assortment of vendors (some with larger orchards, some with a few old fruit trees, etc). Even though Bob mentioned we would have had more than 500 varieties available a century ago, I still find it inspiring to know that many of these old varieties have been kept over the years, tended and valued, and are all locally available through our farmers - even if not at the regular grocery store.