We have been doing some pruning of berry bushes and grapes around here - the grapes were done about a month ago, but we were a little late on the raspberries.  However, better late than not at all in this case, where the raspberry hedge was quickly taking over our path.

~ in all pruning, remember to use sharp pruners so clean cuts are made of each branch
~ use clean tools so any diseases are not spread to other plants
~ pruned branches generally don't compost well, so dispose of them in yard waste bags, or if you have the space, create a longer term stick compost pile in a back area of your yard where they can slowly break down
~ wearing gloves is a good idea, especially for currants, gooseberries and raspberries!
~ find a mentor, if you can, who will let you observe pruning for your first season

Red Raspberries
Remove all weak, diseased and damaged canes at ground level, and cut any tips that have died due to harsh winter conditions.  Generally this is done in March or April.  Leave the strongest healthiest looking canes, keeping about 6 inches of space between each other.

Grapes
Grape pruning is a little more complicated.  There are many more buds produced on each vine than can be ripened into fruit, so vines need to be pruned back in order to have enough energy to ripen fruit adequately.  Grapes also prefer sunlight to help ripen, so excessive grape leaves should be pruned back during the growing season. There are various ways to prune/train a grapevine (on a trellis, on an arbour, etc) and we won't go into the details here.  We find Rodale's The Organic Gardener's Complete Guide to Vegetables and Fruits to be a useful resource book for this, and other questions we have about small fruits (berries, grapes, etc).

Gooseberries & Currants
These berry bushes produce fruit on 2-3 year old branches.  Older shoots should be pruned away as they will provide very little fruit.

Blueberries
Blueberries also produce majority of fruit on 2-4 year old branches, so any older or dead branches should be trimmed away in early to late spring. 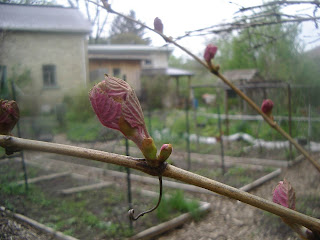 Posted by littlecityfarm at 9:50 PM