The story of our wild apple harvest continues...over the weekend we did in fact make apple jelly and apple sauce - lots of it!   A reader sent me the tip (thank you!) that our unnamed wild apple might in fact be an old Gravensteiner, a type of apple tree that is still commonly found in old orchards though is seldom grown in commercial production due to a short shelf life and variable harvesting period.  I love learning the histories of our food and how it originated, so I did a little more research into the Gravenstein apple.  It turns out the description and photos seem to match - a small apple with sweet tart flavour, lightly yellowish flesh, and red striped skin, that ripens from July-August.  It was used mainly as a cooking apple for sauces and apple cider.  This apple is native to Denmark, found and named in the mid 1600's, although it may well have been brought there from Italy at an earlier time.  In Canada it was brought to Nova Scotia in the early 19th century, and today is still widely grown across the country, mainly on old farmsteads, or in backyards just like the tree we found.  It is considered to be a prized apple, of which was once said "if the Gravenstein could be had throughout the year, no other apple would be needed".  In fact, Slow Food USA has declared it a heritage apple and added it to the Ark of Taste, an international catalogue of heritage foods that are in danger of extinction.  Wow!  This apple jelly will taste all the sweeter, knowing the story of this special apple. 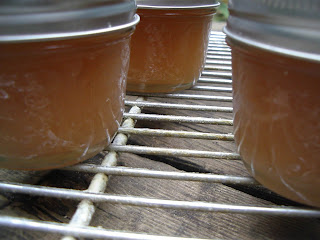 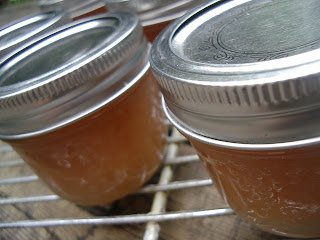 Posted by littlecityfarm at 3:54 PM