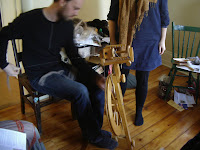 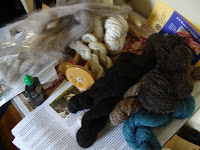 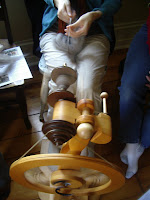 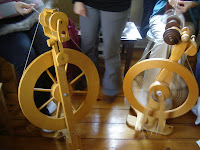 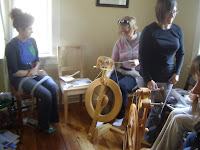 A beautiful fall day..while Greg was out raking leaves, spreading compost, and preparing garden beds for planting garlic, I was inside learning about the wonders of natural fibres during the latest homesteading workshop here at Little City Farm.

Nicole from the KW Spinners & Weavers Guild is a natural teacher, and led our small group through the process of cleaning, carding, and spinning a variety of natural fibres (mohair, alpaca, angora, wool, llama, yak, cotton, silk, and even cornsilk!) in both the "short draw" (used for long fibres) and "long draw" (generally used for short fibres). We also learned the "anatomy" of a spinning wheel, and had opportunity to practice on both the single and double-treadled wheels. I think several participants will be hooked for sure, as this spinning seems to be addictive once you get the hang of it. I did get the chance to run outside to harvest some fresh milkweed pods from our yard, which I managed to card into two small "rolags" (ie. rolls) and Nicole spun into a lustrous silky thread - wow! Apparently parachutes were made of milkweed fluff during the WWII, but probably due to impracticality of harvesting them, not to mention the cheap cost of cotton, milkweed has been forgotten as a fibre material. Of course, now we are seeing bamboo in everything, and hemp is becoming more available in all manner of fibres and textiles. The next steps after spinning would be dying the fibres and then all manner of knitting projects (many in the room were already avid knitters, though these lovely skeins would tempting to just leave around the house as decoration after all the hard work of spinning them!).

Wellington Fibres, on a farm near Elora, was recommended as a great local source for fibres, fibre processing, spinning wheels, workshops and advice. They raise 30 angora goats, and run their operation as "green" as possible, using solar panels and other sustainable technologies to operate their business. www.wellingtonfibres.on.ca
Posted by littlecityfarm at 6:01 PM